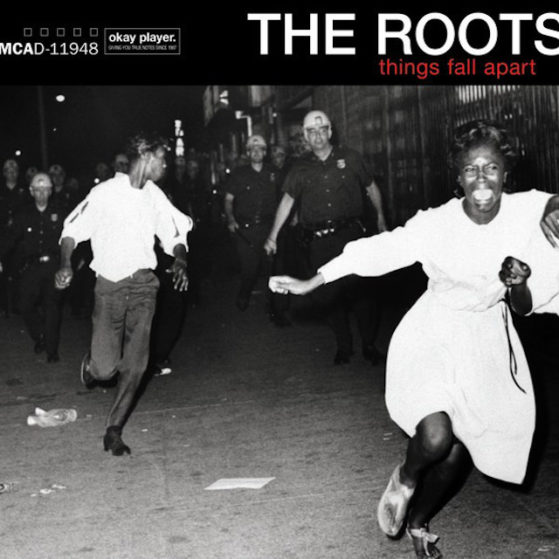 Things Fall Apart is the fourth studio album by American hip hop band The Roots, released on February 23, 1999 by MCA Records. Recording sessions for the album took place at Electric Lady Studios during 1997 to 1998, coinciding with recording for other projects of the Soulquarians collective, including D’Angelo’s Voodoo (2000), Erykah Badu’s Mama’s Gun (2000), and Common’s Like Water for Chocolate (2000). According to Spin magazine, the album is a landmark moment for The Roots and the collective, as it “swelled the Roots clique into a movement-style posse”.

The album has been considered by music writers as The Roots’ breakthrough album, earning praise from major publications and critics, while becoming the group’s first record to sell over 500,000 copies. It includes the song “You Got Me”, which won the 2000 Grammy Award for Best Rap Performance by a Duo or Group, while Things Fall Apart was also nominated for the Grammy Award for Best Rap Album of the same year, losing to Eminem for The Slim Shady LP. Rolling Stone called it a “top-flight record”, while AllMusic cited it as “one of the cornerstone albums of alternative rap.” The album takes its title from Chinua Achebe’s novel of the same name, which in turn took the phrase from William Butler Yeats’s poem “The Second Coming”. On April 5, 1999, Things Fall Apart was certified Gold by the Recording Industry Association of America (RIAA) for shipments of 500,000 units and on April 22, 2013, fourteen years after its release, the album was certified Platinum by the Recording Industry Association of America for shipments of 1,000,000 unit.

Recording for Things Fall Apart began in 1997 and was completed in early 1998. Sessions for the album coincided with those for other Soulquarians projects at Electric Lady Studios, including D’Angelo’s Voodoo (2000), Erykah Badu’s Mama’s Gun (2000), and Common’s Like Water for Chocolate (2000). Questlove has stated that during this period, the group recorded upwards of around 145 songs, later whittling down their choices to 14 songs (intros and interludes withstanding). The last song to be included to the final selection was “Double Trouble”, featuring Mos Def. Initially, the song was supposed to feature a guest appearance from Mos’ Black Star partner, Talib Kweli but due to the format of the track, it was decided to make it a throwback to the Run D.M.C./EPMD tag-team style of rap, with just two MCs.

The album’s opening track, “Act Won”, contains an excerpt from the Spike Lee film, Mo’ Better Blues. The excerpt is from a scene where Denzel Washington and Wesley Snipes are discussing the current state of African American music (or culture in general) after a gig. The track “Act Too (The Love of My Life)”, originally an interlude that evolved into a full song, features Common, whose verse is a continuation of his song “I Used to Love H.E.R.”, off his 1994 album Resurrection, in which Common speaks of hip hop as a woman. However, Questlove has stated that this is not “I used to love H.E.R. (the daughter), rather it is a “reflection on the evolution of hip hop, through our eyes.” Beanie Sigel made his recording debut on the track “Adrenaline!”, after tagging along to a weekly jam session held by the group in Philadelphia. Eve (at the time, signed to Dr. Dre’s Aftermath label, and known as Eve of Destruction) also made her debut on Things Fall Apart, on the track, “You Got Me”.

“You Got Me” was co-written by Jill Scott who recorded vocals for the song’s chorus and bridge. Her part was subsequently re-recorded by Erykah Badu at the insistence of MCA, who wanted a higher profile collaboration for the album’s official lead single – as Scott was relatively unknown outside of Philadelphia at the time. When the group later went on tour, Scott joined them during performances of the song. “You Got Me” caught on quickly with radio and later MTV, giving the group a much needed boost in terms of sales and exposure. Its Grammy win provided a second round of success. The outside musicians who contributed to the album (mainly D’Angelo, James Poyser, and Jay Dee) were part of the Soulquarians collective with Questlove and Pino Palladino.

Upon its release, Things Fall Apart was widely regarded as the group’s most fully realized work. Critics praised the album for its sobering themes, sonic quality, and fluid, cohesive sequencing, with Touré of Rolling Stone calling it a “top-flight record” and lead MC Black Thought a “lyricist’s lyricist with a hard, earnest voice that doesn’t flow like water but bobs and weaves with less-predictable rhythms”. Mojo commented that the album is “the stunner they’ve always promised: the first candidate for hip hop album of 1999 … in a hip-hop world dominated by well-worn pop samples and rap rewrites of 80’s chart hits, such risk-taking should be cherished”. Marie Elsie St. Léger of Barnes & Noble wrote in her review that the album had “Unfussy yet precise production, irresistible beats, and smooth rhymes. Few albums manage to simultaneously be this informative, political, and downright groovy.”[24] Spin’s Neil Kulkarni suggested that “the Roots have created perhaps rap’s first melancholy masterpiece”, noting “a downered, fragmented feel to the music that weaves through the lyrics’ bleak resignation to instill real poignancy and effect.”

Steve Jones of USA Today complimented the band’s “jazzy, live instrumentation and dense, insightful lyrics” and commented that it “elevates hip-hop with literate, thoughtful grooves”. In his consumer guide for The Village Voice, Robert Christgau criticized Kamal Gray’s “omnipresent ostinato beds”, but commended the band for “looking back to the old-school rap they loved before they discovered jazz lite”, and stated “What’s so consistently annoying on their earlier intelligent records is almost hooky on this one, integral to a flow that certainly does just that, which isn’t to say you won’t be relieved when it rocks the house instead”. Fans responded with as much enthusiasm, and the album shipped Platinum in the United States.

For a limited time period, Things Fall Apart was made available with a choice of five different front covers. One such cover displays a photograph taken during a riot in the Civil Rights Movement era. In the stark black-and-white photo, riot police are seen chasing two black teenagers on the streets of Bedford-Stuyvesant. In 2005, this cover was included in the book, The Greatest Album Covers Of All Time by Barry Miles, Grant Scott & Johnny Morgan, and published by Collins & Brown.