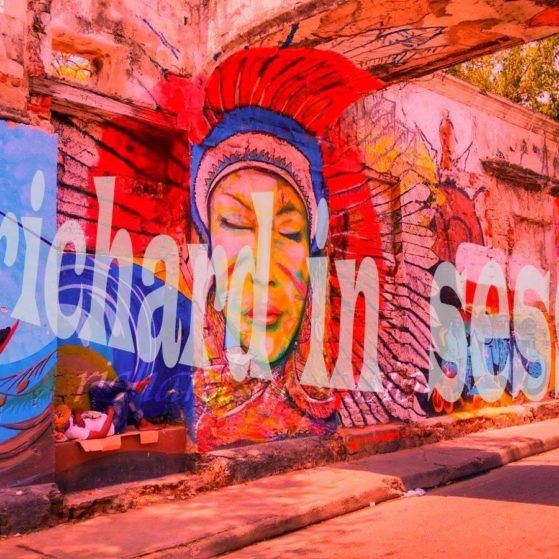 Disco, Funk, 80’s Soul, and a little old school Reggae is the order of the evening played by Richard Lorenzo on the LWR Classic Evry 1st Sunday of the month 8-10pm GMT. A little bit of what you fancy does you good!!!

Like most Caribbeans growing up in London Richard was influenced by traditional Caribbean and UK culture including food and of course music. It was the early seventies and at home music was brought over directly from Jamaica and South America via family friends and relatives. As a kid the parties thrown by his parents and their friends started Richards initial interest and he began secretly playing his fathers treasured records on the gram when his parents weren’t at home. His dad would actually check for any scratches and damage to his vinyl collection.

His fathers record collection consisted of small 7inch 45’s (Trojan, Studio One, Coxone, PAMA) and a variety of LP’s (Motown, Curtom, Brunswick labels) and, Latin (Fania) Labels. The interest was not only the music but also the colourful album sleeves depicting the content of the music.

School in North London was a an incredible experience, but not really for studying. Linking up with friends meant more exposure to music. It was the early 80’s and reggae house parties were common around London. The difference was now more soul and disco was being played. Richard recalls seeing Dj’s for the first time spinning tunes at the parties of his parents friends and thinking wow that looks cool. Locally friends in north London were listening, dancing and skating to a new a new soulful sound called ‘Jazz funk’. Around that time there was a distinct difference between soul and reggae heads. However, Richard loved the both genres. It was a real tough choice. Stay true to your school friends and listen to reggae or come out as ‘soul bwoy’.. Either way it could mean a hard time from your peers. In reality what happened was magical.

Friends would bunk school on Fridays to go to Crackers disco and on weekends Royalty Southgate, Lyceum and Bumbles in Wood Green. He recalls some funny situations of sneaking into Clubs due to being underage and obviously then getting ‘turfed out’ by the doormen.
Fashion as per usual, became associated with both reggae and soul music. If you were into soul / Jazz funk you had to look the part. Designers Fila, Sergio Tacchini, Ellesse, Cerruti, Robbe de Kappa, tracksuits and Burberry macs, Pringle diamond jumpers, Gabicci cardigans, Lois cords, Lacoste T’s, Farah slacks and Diadora trainers. Yea signature gear. Funnily enough the reggae scene wore similar gear. At the same time, the football terrace scene was now linked to soul music, with the rise of the ‘casuals’ and their infamous ‘tear ups’. Locally reggae sound systems were still in the thing such as, Entebbe sound, Jah Shaka, Jah Tubbys and then Saxon. Richard hung out with both crowds.

Welcome Back Soul: By the mid 80’s soul and reggae was now being heard on radio. Although legal stations would only offer around hour or two of dj’s like Mike Allen on Capital, Robbie Vincent, Greg Edwards and David Rodigan and Tony Williams on Radio London. However, around that time everyone was talking about pirate radio stations playing continuous soul and reggae. Richard began to get longer fix of the music he loved, played by people who loved the music. By now Richard started to experiment more with his dads records and started buying more and more tunes. He always thought one day he would be on a pirate.

Around the mid 80’s he met with a new neighbour who was a bouncer at soul clubs outside of London. This guy had a flash car and always seemed to be with a different girl. This guy had a decent sound system in his car, but usually it was booming soul music, not reggae. They soon clashed over music but that’s all. He invited Richard and a mate to come with him to a soul club where he was working one Saturday night. Richard recalls the club being Zero 6 Southend. A dj called Froggy was playing at the time. Again there are many incredible and funny stories from that time. Ask Richard and he’ll tell all.

Sound System Soul Days: By late 80’s Richard started to play his around local parties and ruin his neighbours quiet time. His passion had been awakened. Whilst his friends were checking girls at parties, Richard was listening for tunes and ways of playing better than other dj’s. During that time he also met another dj called Peter Din MC. Peter was a true soul music connoisseur and had an amazing record collection. Richard had a talent for mixing his soul music. They decided to link up, build a sound system and put on parties. These parties were a mix of reggae and real soul. There’s is also a funny story about a winning dj competition but he says that’s one for another day.

Record Collecting: Although he borrowed many of his father’s and sister’s records, he would spend his free afternoon study time record hunting. This started to take up weekends too. Richard recalls visiting his aunt in Miami and spending the majority of time trawling second-hand record shops for rare vinyl. Soon more opportunities arose to start playing these records.

LWR Years:
For the uninitiated, this was one of the first pirate stations dedicated to black music in the UK. By the Late 80’s Richard’s dream finally came true. He was given the opportunity to play on the same station as some of the Dj pioneers of this music in the UK, Ron Tom, Barry Mixmaster B, Jasper the Vinyl Junkie, Maxi Jazz (Soulfood Café/ Faithless), DJ Elaine, Master MC (Rapattack), Jigs and later Rampage. He is still thankful to Zak, Steve Collins and Fuzzy D for this opportunity. He still has some of the mix tapes of his shows on believe it or not, tape! Remember C90 Tapes!!!

Legendary Mansion Parties: By the 1990’s when everyone was doing the ‘acid house’ thing Richard and others in London’s Muswell Hill, Highgate Hampstead and Crouch End had their own thing going. These areas had their own sub culture with creative and arty types. Joy mansion parties started up. These parties were a real buzz in London. He recalls one Hampstead mansion party where so many people turned up that traffic jams caused chaos. The main idea at these parties would be that he would DJ alongside live funk/ soul bands. Respect to ‘Fistfunk’ and Ernie, Graham Sil and Kofi Kari Kari, Kevin Pitts, Dj Fingers Muswell Hill legends.

Then to Now: He’s now done a number of gigs abroad. He recalls the first gig in France, was amazing and ended with a pool party at the house of the owner of Radio Nova. After sessions in Morocco, Spain and Miami Richard did various London and Brighton clubs and then found a brand new venue in North London. Bar Rocca was a blank canvas, the owners just wanted music to pull the punters. Here, he could play music he wanted and the owners were up for it. In less than a year the venue which was just a large empty bar now had queues along the street. This lasted for four incredible years. During that time he also collaborated with various producers put out various re mixes on white labels.

Recently he has been spending time in South America and Miami and absorbing a wealth of Latin music.

We’ll that’s his story for now and reflects: The way forward is to know your past.
_____
Many thanks to Zivile M for putting my music history to paper. I’ll do same for you one day.  [LWR Archives]