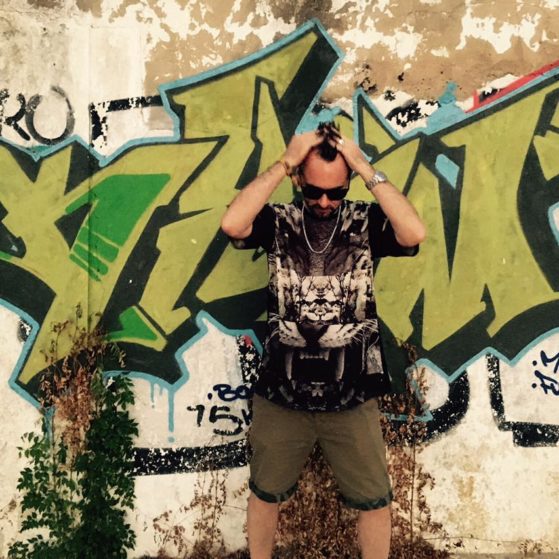 Over the last 15 years I’ve been lucky enough to DJ at many of the best clubs in London including FABRIC, SOSHO, EGG, 54, M.O.S, CENTRO/THE DEN (AKA THE END), PLAN B, EAST VILLAGE, CABLE, HERBAL, THE KEY, DRIVER, LOST ANGEL, 1001, SHOREDITCH HOUSE aswell as many U.K underground clubs such as STUDIO 11, WHIPPING HOUSE and becoming internationally acclaimed with a host of successful tours as far a field as Russia, Mexico, Hong Kong and the Phillippinnes.

In 1989 he had his first real musical influence watching a 1988 DMC Mixing Finals video tape, observing the amazing cutting & scratching skills of DJ Cash Money. This inspired him to become a disk jockey. In 1991 he got his first decks, an all in one with rotary knobs and no pitch controls plus 30 Acid House & Hardcore Breakbeat records. Among these were “House Is Mine” on Rising High, “Edge 1” & early work from BLAME.

In 1992 he began playing at illegal parties in unused warehouses in Linclon.

After a few years Djing & sneaking into Raves he decided to move to Nottingham.

At 17 he promoted D&B parties in Nottingham at clubs such as the SKY CLUB, THE LENTON & THE HOUSE. Through these he met the Sherwood Forest rave promoters Freek Bros & PE.2 Crew. He then moved to London in 1996.

There Max heard word of a new club opening called FABRIC and  got a job there.  A year later the head of Promotions offered him a position promoting the club & looking after the DJ’s & performers on Friday & Saturday Club nights.

Due to a cancellation by DJ legend Fabio in 2001, He was asked to fill in. The set went down well & brought a lot of positive feedback. Since then he hasn’t looked back and has gone on to DJ at many of London’s top bars and  clubs playing all different genres of music, but mainly Minimal, House & Techno at the top clubs in the capital such as EGG, SOSHO, THE DRIVER, CAFE 1001, CABLE and at such promotions as CANT STOP WONT STOP, BREAKFAST @ EGG & SUPERNOVA.

Since those early days. Max now specialises in underground tech house, with strong influences from drum n bass and disco. Max has remained at the forefront of a new wave of british dance DJ’s and is most at home delivering the big room sound. Creating distinctive sounds with his characteristic infectious beats. notably Max was the 2016 resident at the RAVE OF THRONES UK tour.

For the last few years, Max has focused his talents in production and has launched his own record label Romulus Recordings.