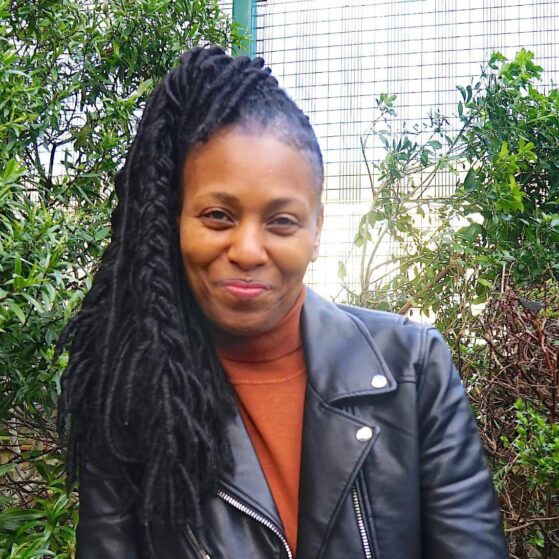 Joannie loves entertaining and comes alive when she is most on the stage and always the DJ at family parties or some events where Joannie will play in between her sets as a vocalist.

In the late 80’s Joannie was asked by a friend if she would like to do a slot on PCRL a radio station that was very popular in Birmingham.  Joannie decided that this would be a good platform to building confidence and showcase her talents to others.  As Joannie always fancied herself as a DJ as well as vocalist.  Marrying the two together.  Joannie also took part in doing jingles for BRMB in the early 80s into the 90s.

Unfortunately, Joannie did not gain the chance to continue with her DJing as many obstacles stood in her way.

Joan continued to embark on her journey as a singer.

Joan has been writing her own songs and poetry since she was 12 years old.

The musical career of Joan started in 1983 staging live cover versions at clubs and various pub venues in Birmingham.

In 1986 Joan took part in a musical for the Birmingham Youth Show called ‘A great night out’ this was for 3 nights at the Birmingham Repertory Theatre.

1991 Joan took part in the Yak Club’s Kabaret Theme Show which was also part of the Birmingham Youth Arts Council.

Joan performed with a five piece acapella group Black Voices where they toured in Europe going to places such as Amsterdam, France, Holland.  Black Voices went on to create an album called No Additives which was produced by local artist David Hinds  who is member of the an established reggae band Steel Pulse later on Joan decided to go solo giving her the opportunity to develop into her own style.  Joan did backup vocals for the likes of ‘Steel Pulse’ and ‘Thriller Youth’ reggae artists.

Joan also joined a group called Perfect Timing, they performed for the Womens Festival and, sessioned for Phil Souser a Folk Singer in which they had a chance to perform their own songs.

In 1992, Joan took part in a Celebrity Charity event to raise funds for the Somalia Relief.

1995 – Joan continued to do more session work for various artists and a group called Force Nine a Birmingham based band.

Joan became involved with Philip Jones a Songwriter /Composer/Producer /Engineer and Musician in his own rights.  Together they wrote songs and composed music.

1997 – Joan was also part of Small Heath New Life Community Choir, singing solo parts and conducting as and when required.

Joan continued to sing solo at Weddings and Funerals during her break due to family life.

2000 – Joan moved to Burton Upon Trent and found herself joining a local High School in 2006 where Joan embarked on an after school programme in 2010 to help the young talented people who had a passion for singing to be able to come and write and sing their own songs or utilise their voices over instrumentals, which resulted in Joan and another colleague taking the young people into a studio to work on an album and sing at school events.

After moving to Hampshire in 2012, Joan started working at a Pupil Referral Unit where she was able to help other young people who had musical talents.  Joannie also found herself being involved in a DJ workshop run by DJ Julie Martin who works with Kane FM, whilst at the Unit.  Which ran every week for the young people to gain a qualification.  Joannie had to oversee the young people with setting up the equipment and helping where she could.

Joan continued to help other young people in her role as Mentor and decided to reinvent her voice by joining a gospel choir and became a member of Gospel Road Community Choir in 2014 where Joan sings lead vocals on some of the songs, singing at local charity events and local church events.

Joan also sang for Chichester Rugby Club, using her platform to also DJ, portraying herself as a DJ singer, playing music as well as singing for the crowd.  Which brought back memories of when she used to DJ on PCRL a radio station which started in the late 1980’s.

January 2017 – After putting together a band called The Masquerades.  They were successful in gaining lots of work from venues in their local area of Portsmouth, Southampton and Gosport playing Motown, Blues, soul covers.  After a spell with the band.

In 2019 – SoulsNTwined Jazz duo was formed – vocal and sax

2019 also saw Joannie taking part in various vocal sessions, even joining the brilliant Gospel House Choir.  Joannie learnt techniques on developing her vocals and finding the confidence in her own abilities again as a vocalist and decided also to learn the Saxophone an instrument that as always being in the forefront of Joannie’s mind for years.

Late 2019, Joannie decided to become involved in with a charity another passion and started to do live performances for The Smile Brigade, providing fun entertainment by Djing, singing and doing Karaoke sessions with the people who attended.  Creating a family atmosphere with requests.

2020 – Joannie decided that it was the right time to showcase her own original material.   First release mini EP Introducing which was released on 20th March 2020 working with the help of Mayfield Studios, Portsmouth and the wonderful vocalist Chloe Josephine singer/songwriter and vocal coach who features on Hanging on A Thread and Show Me love.

Before lockdown Joannie was hoping to offer services to venues as a Singer/DJ and to set up a Poetry Corner in order to draw others in who have the same passion?  Creating a new platform for all who love the spoken words or who just want to share what they do.

Joannie like many independent artists/creators is trying to make a difference as she makes a late journey of what should have been and managing to spread joy with whoever she may encounter.  Joannie would like to leave a legacy and states it’s never too late to do what you set out to do.

Catch Joannie Joannie’s  ‘Breakfast Club’ 9am – 12midday – Mondays and Thursdays on ‘Classic’ and Tuesdays and Fridays on the ‘Reggae’ platform.