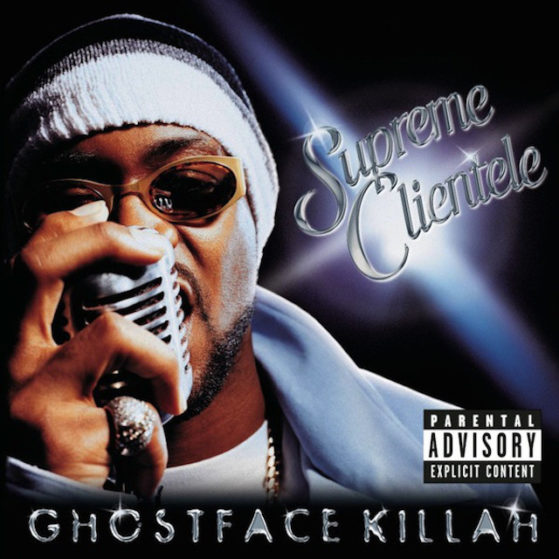 Supreme Clientele is the second studio album by American rapper and Wu-Tang Clan member Ghostface Killah, released on February 8, 2000 by Epic Records. The album showcases Ghostface’s signature up-tempo, stream-of-consciousness rhyme style, and features guest appearances from Cappadonna, GZA, Masta Killa, Method Man, Raekwon, Redman, RZA, U-God, and others. It features affiliates of what would become members of Theodore Unit and T.M.F. Supreme Clientele contains a large amount of production from group member RZA, who also re-worked and remixed beats from other producers involved, as a means to create a unified and cohesive sound for the album.

Upon its release, Supreme Clientele debuted at number seven on the Billboard 200 chart and number two on the Top R&B/Hip-Hop Albums chart, while selling 134,000 copies in its first week. On March 8, 2000, it was certified Gold in sales by the Recording Industry Association of America (RIAA). The album featured the singles “Apollo Kids” and “Cherchez La Ghost”, which, despite receiving limited airplay, went on to achieve notable chart success.

Supreme Clientele was met with mostly strong reviews from music critics, despite its contrasting sound and style to that of his previous album, Ironman (1996). It was praised and noted for Ghostface Killah’s obscure and creative lyricism, and for the cohesive format of production. Supreme Clientele was the most acclaimed of all the second generation Wu-Tang projects, and featured the most contributions from RZA during this era. Along with Ironman and Fishscale (2006), it is often ranked as Ghostface Killah’s best work. It has also been regarded as one of the best solo Wu-Tang albums, and has received accolades for being one of the best albums of the 2000s decade.

After the release of Wu-Tang Clan’s second album Wu-Tang Forever (1997), group leader RZA assigned the members to work primarily with affiliate producers on their up-coming solo projects, while he “called dibbs” on Ghostface Killah. RZA also instructed the members to keep Wu-Tang guest appearances to a minimum, as he saw their earlier solo albums as “giving away Wu-Tang to labels who had only signed one member”. Although RZA would work occasionally with other group members and affiliates during this time, Supreme Clientele would be the Wu-Tang related project he was most involved in since Wu-Tang Forever.

Recording for the album began in 1998, and took place at several studios in New York and Florida. These sessions, however, would be interrupted due to Ghostface Killah serving a prison sentence at Riker’s Island for a 1995 charge he got at the Palladium nightclub in New York. Although Ghostface was in prison for six months, he still had a weapons charge that was pending when he and RZA got back to finishing the remainder of the album

In late 1997, Ghostface Killah and producer RZA took a several month long trip to Africa, where a large portion of Supreme Clientele’s lyrics would be written. While in Africa, the culture had an effect on Ghostface’s lyrics. Unlike his acclaimed lyricism on his debut album Ironman, and Raekwon’s Only Built 4 Cuban Linx…, Ghostface Killah rarely makes references to crime and materialism on Supreme Clientele. He explained “Fuck all this Tommy Hilfiger, Polo, all that shit. They don’t give a fuck about none of that in Africa. Everything is the same. But over here, everybody wanna be better than the next one. Nah, it’s not like that over there. They might be fucked-up money wise, but trust me, them muthafuckas is happy. They got each other”.

RZA (pictured in 2001) began recording sessions with Ghostface Killah in 1998.

One of the earliest lyrics Ghostface wrote while in Africa was “Nutmeg”, a song with a rhythmic, off-beat cadence. Regarding the song’s form, he stated “That’s a wild song. That shit’s one of the illest styles I ever came up with, because I had no music to write to”.

Supreme Clientele contains an insult toward then-up-and-coming rapper 50 Cent. In the “Clyde Smith” skit, Wu-tang member Raekwon, with the use of voice distortion, plays the role of a man named Clyde Smith. Clyde Smith addresses 50 Cent and his 1999 song “How to Rob”, in which 50 Cent rhymed about how he would rob many popular recording artists, including several members from Wu-Tang Clan. The skit drew a response from 50 Cent, who later replied in an underground mixtape.

In the mid-1990s, Producer RZA had a flood in his basement studio, which resulted in the loss of recording equipment and several hundred beats, many of which were unfinished. As a result, he would have to use new equipment, and completely start over for production contributions. In a later interview, he stated “The jewel of the whole shit is that I lost mad shit in that flood. I got it again. It took me about two years, but I got now at least 200–300 beats. I studied the music, I studied the books and I said ‘fuck that. Hip-hop is gonna be able to be played in Carnegie Hall. Not with a DAT, but with a 10-piece orchestra, and have a turntable in it, and Bobby Digital right there in the middle’. “

Although a number of producers, such as JuJu from The Beatnuts, Hassan of the U.M.C.’s, The Hitmen and several Wu-Tang affiliates are credited for production, RZA and Ghostface Killah did the majority of the production and mixing for Supreme Clientele, as they “re-compiled” and “re-worked” the album’s beats. RZA explained “Usually a producer comes in, makes a beat, mixes it, and gives the direction for it. But not with this album. That’s why you get that special sound. I just needle and threaded the beats all together.” This approach would result in critical praise for its fluidity and cohesiveness.

Upon its release, Supreme Clientele received critical acclaim, with several critics lauding it as a return to form for the Wu-Tang Clan collective following middling reception to other solo releases from Wu-Tang members. Vibe critic The Blackspot wrote that, in spite of “speculation of Wu’s demise”, Ghostface Killah “saves the day with the naysayer-silencing Supreme Clientele. Championing the cause of Wu dominance, Supreme Clientele exemplifies Ghost’s lyrical dexterity.” M.F. DiBella of AllMusic wrote that Ghostface Killah had avoided the sophomore slump experienced by other Wu-Tang Clan members’ second solo releases with Supreme Clientele, which “proves Ghost’s worthiness of the Ironman moniker by deftly overcoming trendiness to produce an authentic sound in hip-hop’s age of bland parity” and “is a step toward the Wu-Tang Clan’s ascent from the ashes of their fallen kingdom.” The Source hailed it as being “as entertaining as his debut Ironman” and an “A+ record in Wu fashion … a Wu album in the Wu-est sense.