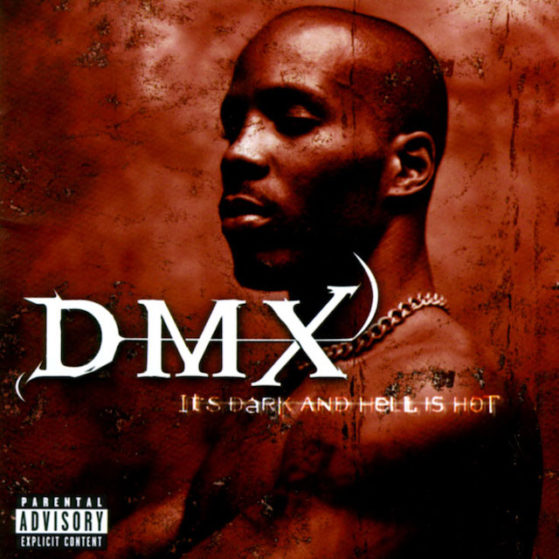 It’s Dark and Hell Is Hot is the debut studio album by American rapper DMX. It was released on May 12, 1998 by Ruff Ryders, Def Jam, and PolyGram. It was supported by four singles—”Get at Me Dog”, “Stop Being Greedy”, “Ruff Ryders Anthem” and “How’s It Goin’ Down”, in order of release—and their accompanying music videos.

It primarily includes production from Dame Grease (13 tracks) and PK (8 tracks), in addition to production from Irv Gotti and Lil Rob (2 tracks), Younglord (1 track; add.), and Swizz Beatz (1 track). The album is widely considered a classic among hip hop fans and critics.

Just as rap music was reaching its toughest, darkest, grimmest period yet, following the assassinations of 2Pac and Biggie in the late ’90s, along came DMX and his fellow Ruff Ryders, who embodied the essence of inner-city machismo to a tee, as showcased throughout the tellingly titled It’s Dark and Hell Is Hot. Unlike so many other hardcore rappers who are more rhetorical than physical, DMX commands an aggressive aura without even speaking a word. He showcases his chiseled physique on the arresting album cover and trumpets his animalistic nature with frequent barking, growling, and snarling throughout the album. He also collaborates with muscular producers Swizz Beatz and Dame Grease, who specialize in slamming synth-driven beats rather than sample-driven ones. Further unlike so many other hardcore rappers from the time, DMX is meaningful as well as symbolic. He professes an ideology that stresses the inner world — characterized by such qualities as survival, wisdom, strength, respect, and faith — rather than the material one that infatuates most rappers of his time. It helpes that his album includes a few mammoth highlights (“Ruff Ryders’ Anthem,” “Get at Me Dog,” “Let Me Fly,” and “I Can Feel It”) as well as a light, mid-album diversion (“How’s It Goin’ Down”). The long running length of It’s Dark and Hell Is Hot does wear you down after a while, since nearly every song here sans “How’s It Goin’ Down” hits hard and maintains the album’s deadly serious attitude. Even so, It’s Dark and Hell Is Hot is a tremendous debut, laying out DMX’s complex persona with candor, from his faith in God to his fixation with canine motifs, and doing so with dramatic flair.

The album debuted at number one on the Billboard 200, and sold 251,000 copies in its first week in the United States. The album was certified 4x Multi-Platinum by the Recording Industry Association of America (RIAA) on December 18, 2000.