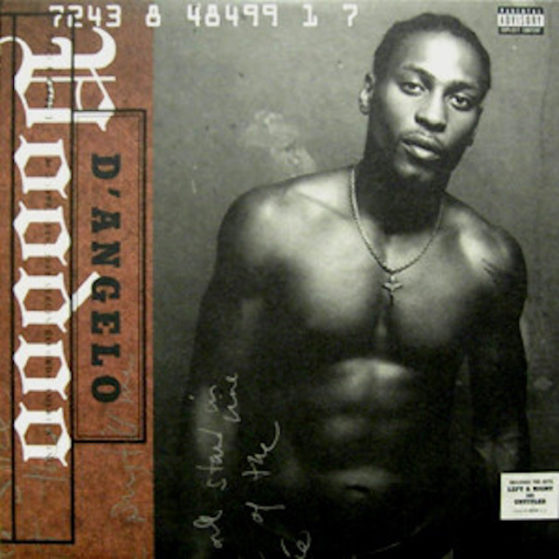 Voodoo is the second studio album by American neo soul singer, songwriter, and multi-instrumentalist D’Angelo. It was released on January 25, 2000, by Virgin Records.

D’Angelo recorded the album during 1998 and 1999 at Electric Lady Studios in New York City, with an extensive line-up of musicians associated with the Soulquarians musical collective. Produced primarily by the singer, Voodoo features a loose, groove-based funk sound and serves as a departure from the more conventional song structure of his debut album, Brown Sugar (1995). Its lyrics explore themes of spirituality, love, sexuality, maturation, and fatherhood.

Following heavy promotion and public anticipation, the album was met with commercial and critical success. It debuted at number one on the US Billboard 200, selling 320,000 copies in its first week, and spent 33 weeks on the chart. It was promoted with five singles, including the hit single “Untitled (How Does It Feel)”, whose music video garnered D’Angelo mainstream attention and controversy. Upon its release, Voodoo received general acclaim from music critics and earned D’Angelo several accolades. It was named one of the year’s best albums by numerous publications.

D’Angelo promoted Voodoo with an international supporting tour in late 2000. While successful early on, the tour became plagued by concert cancellations and D’Angelo’s personal frustrations. Voodoo has since been regarded by music writers as a creative milestone of the neo soul genre during its apex. It has sold over 1.7 million copies in the United States and has been certified platinum by the Recording Industry Association of America (RIAA).

Voodoo incorporates musical elements of jazz, funk, hip hop, blues, and soul, as well as ambient music with a musical layer shaped by guitar-based funk. It features vintage influences and a looser, more improvisational structure, which contrasts the more conventional song structure of Brown Sugar. Music writer Greg Kot has considered the album a production of the Soulquarians, calling it “the most radical of the many fine records” conceived by the collective’s members. In an interview with the New Orleans Times-Picayune’s Shawn Rhea, D’Angelo attributed the album’s experimental and jam-like atmosphere to the fact that most of Voodoo was recorded “live and its first take”. On its eclectic and conceptual style, Rhea commented “[D’Angelo] seems to have channeled the brilliance of his musical forefathers, living and dead, during the crafting of this album. It is a complex, intricate collection of songs that, like voodoo, is simultaneously secular and spiritual, sensual and sacred, earthbound and ethereal”.[42] Recording engineer Russell Elevado’s analog mixing and old school production techniques contributed to the album’s jazz element and vintage sound. On its jazz influence, D’Angelo stated “because a lot of the album was cut live and has free playing on it, it was hard not to go in a jazz direction”.

While most musical compositions rely on tension and release, which can be produced by factors such as soft verses and loud choruses, gradual buildup, subtle tension within verses or over the course of the bridge, or harmonic tension in chords that provides space for improvisation, D’Angelo’s arrangements for Voodoo subdivide the tension into each of the songs’ moments. According to music critic Steve McPherson, the concept results in “no linear way to measure how far off things slide before they pull themselves back … can’t be measured in beats or fractions of beats in a meaningful way. For lack of a less cliched word, it’s entirely ‘feel'”. This type of syncopation serves as the center for Voodoo, rather than the more conventional method of using it as flavoring or departure from the center. According to New York Daily News music journalist Jim Farber, “In order to counter the slickness of modern R&B, D’Angelo’s album reconfigured – and updated – the adventurous song structures and lowdown grooves of early-’70s works like Curtis Mayfield’s ‘Move On Up’, Isaac Hayes’ ‘Hot Buttered Soul’ and Marvin Gaye’s ‘Let’s Get It On’.”

The album features aggressive multi-tracking of D’Angelo’s voice, a technique similar to the production of Sly & the Family Stone’s There’s a Riot Goin’ On (1971) and Marvin Gaye’s Let’s Get It On (1973). The multi-tracking on Voodoo significantly affected the clarity of D’Angelo’s vocals. In Voodoo’s liner notes, Saul Williams wrote of its heavy use of multi-tracking, stating “You might respond, ‘Lyrics? Yo, I can’t even understand half the shit that D’Angelo be saying. That nigga sounds like Bobby McFerrin on opium’. And I’d say, ‘You’re right. Neither can I. But I am drawn to figure out what it is that he’s saying. His vocal collaging intrigues me'”. Music writers have also noted the production style and sound of Voodoo as reminiscent of the sound of the P-Funk opus Mothership Connection (1975), Gaye’s downtempo disco-soul record I Want You (1976), and Miles Davis’s jazz fusion works In a Silent Way (1969) and Bitches Brew (1970).

D’Angelo and his crew also utilized a hip hop production style, which often subordinates song structure to a stable foundation for a rapper’s delivery and flow. This was familiar to D’Angelo, as his first original recordings were rap demos. Subsequently, most of the songs were performed without a definitive structure, settling into a mid-tempo groove with minimal verse-chorus-bridge progression. This also resulted in an emphasis on texture over both structure and hooks. New York writer Ethan Smith noted this occurrence, stating “most of the songs aren’t really songs at all – at least, not in the traditional sense”. While not predominant on the album, some tracks incorporate sampling. Most of its production was influenced by hip hop producer J Dilla’s input. On J Dilla’s influence, Questlove stated “He’s the zenith of hip-hop to us. Jay Dee helped to bring out the album’s dirty sound and encouraged the false starts and the nonquantized sound of the record”

In 2001, Voodoo won a Grammy Award for Best R&B Album at the 43rd Grammy Awards, which was awarded to D’Angelo and recording engineer Russell Elevado. The song “Untitled (How Does It Feel)” won for Best Male R&B Vocal Performance and was also nominated for Best R&B Song. The song was also ranked number 12 on The Village Voice’s Pazz & Jop critics’ poll of 2000, as well as number 4 on Rolling Stone magazine’s “End of Year Critics & Readers Poll” of the top singles of the year. Voodoo proved to be one of the most critically praised and awarded albums of the year, topping several critics’ and publications’ “end of year” lists, including the number 6 spot on The Village Voice’s 2000 Pazz & Jop critics’ poll. Rolling Stone and Spin magazine both ranked it number 4 on their “albums of the year” lists, while Time magazine named Voodoo as the number 1 album of 2000. Voodoo was named one of the top ten albums of 2000 by several New York Times staff writers, including Ben Ratliff (number 2), Neil Strauss (number 3), Ann Powers (number 2), and Jon Pareles (number 1).

In 2003, Rolling Stone ranked the album number 488 on its list of The 500 Greatest Albums of All Time, and at number 481 in a revised list in 2012, calling it “an album heavy on bass and drenched in a post-coital haze”. In 2009, Pitchfork ranked Voodoo number 44 on its list of the Top 200 Albums of the 2000s decade, calling it “a triumph of hands-on, real-time, old-school soul minimalism” and citing D’Angelo’s vocals as “maybe the most erotically tactile singing put to disc this decade”. Rolling Stone placed the album at number 23 on its list of the 100 Best Albums of the Decade, stating “The decade’s most magnificent R&B record was also its most inventive — so far ahead of its time that it still sounds radical”. AllMusic editor Andy Kellman has cited Brown Sugar and Voodoo as “two of the most excellent and singular R&B albums of the past 15 years”