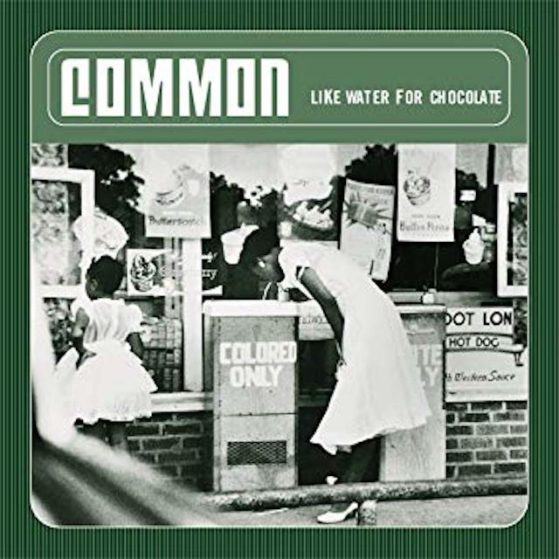 Like Water for Chocolate is the fourth studio album by American rapper Common, released on March 28, 2000 through MCA Records. It was Common’s first major label album and was both a critical and commercial breakthrough, receiving widespread acclaim from major magazine publications and selling 70,000 copies in its first week. The album was certified Gold on August 11, 2000 by the Recording Industry Association of America. According to Nielsen SoundScan, the album has sold 748,000 copies by March 2005. The video for “The Light” was frequently shown on MTV, adding to Common’s exposure. The album also formally marked the formation of the Soulquarians, a collective composed of ?uestlove (of The Roots), Jay Dee (formerly of Slum Village), keyboardist James Poyser, soul artist D’Angelo and bassist Pino Palladino, among numerous other collaborators. This group of musicians would also be featured on Common’s next album, Electric Circus.

The album’s cover photo, 1956 Alabama by Gordon Parks, is a photo of a young black woman in Alabama, dressed for church, and drinking from a “Colored Only” drinking fountain.

Following 1997’s One Day It’ll All Make Sense, Common moved to New York City where he began collaborating with the Soulquarians at Electric Lady Studios. It was there that Ahmir Thompson (?uestlove) who oversaw the album’s production, introduced Common to D’Angelo. Thompson had been doing a great deal of producing there with several members of the Soulquarians, including D’Angelo. The track “Geto Heaven Part Two” was originally supposed to be a track on D’Angelo’s 2000 album Voodoo, but was traded for “Chicken Grease,” a track which Common had intended to include on Like Water for Chocolate.[6][7] Questlove on “Chicken Grease”:

By mid ’99 the Soulquarians were in full swing (D, Me, Jay Dee, James Poyser) and we were working on Common’s Like Water for Chocolate when we came up with this lethal jam. It was so good that D pulled me to the side and said ‘I ain’t no Indian giver … but I ain’t lettin Com walk off with this song..’ He called me 3 times that morning begging to ask Com for that track. Com agreed, and we named it ‘Chicken Grease’ after a phrase that Prince uses when he wants his guitarist to play a 9th minor chord while playing 16th notes.

The title Like Water for Chocolate comes from the 1989 Laura Esquivel novel Like Water for Chocolate, which was adapted into a movie in 1992. The phrase “Like water for chocolate” is of Spanish origin (translated, como agua para chocolate). In many Latin American countries, hot chocolate is made with water rather than milk. The phrase refers to someone who has reached their boiling point, like water ready to be used to make chocolate. In an interview with Combustible the Poet, Common compared the main character Tita de la Garza’s passion for food with his passion for music:

Actually the album is named after a movie of the same title. In the movie the main character was a really good cook. She would always be cooking for people. Whenever she would cook, she would really put a lot of emotion into it. So when people would eat her cooking, they were able to feel the same emotions she felt while cooking it. You feel me? So this is the same thing. I put all my heart, my mind and my rawness into these tracks. So I hope that people can feel that when they listen to the album.

Another popular interpretation of the album title ties in the phrase with the image on the cover of the album. Using the word ‘chocolate’ to symbolise people of dark skin color and the words ‘like water’ to describe the racially provocative concept of providing drinking water of exactly the same likeness for two different races alludes to the famous image and the themes of race that are found within the lyrical content of the album.

Like Water for Chocolate is notable for its Afrocentric themes. It borrows from the Afrobeat genre on the track “Time Travelin’ (A Tribute To Fela)”, the Tony Allen-sampling “Heat” and the Slum Village-assisted “Nag Champa (Afrodisiac For The World)”. MC Lyte and Mos Def join Common for the amusing “A Film Called (Pimp)” and “The Questions,” respectively. In the former, Common sends up his own “conscious” image with a skit depicting him as a hypocritical woman-beater.

Like Common’s previous two albums, Like Water for Chocolate closes with spoken word recited by Common’s father Lonnie “Pops” Lynn. A slightly altered version of the album was released after its success on the charts, with the Macy Gray-assisted “Geto Heaven Remix T.S.O.I. (The Sound of Illadelph)” replacing the original.

As of 2011, the musical interludes on tracks such as “A Film Called Pimp” and “Time Travelling” have been removed from all online versions of the album, possibly due to unconfirmed sample-clearing issues.

Like previous albums from Common, the subject matter discussed in Like Water for Chocolate is of a socially conscious nature. Typically, conscious hip hop’s greatest following is underground, and conscious hip hop artists do not achieve great mainstream success. Yet despite being Common’s first commercially successful album, Like Water for Chocolate maintains the same level of concern and social responsibility that had previously been seen in Common’s first three albums. The album contains significant afrocentric elements which are particularly evident on “Time Travelin’ (A Tribute to Fela)” and “Time Travelin’ (Reprise).” Both tracks discuss the ills of modern society and are a tribute to Fela Kuti, a pioneer of Afrobeat music and a prominent human rights activist, with “Time Travelin’ (Reprise) featuring Kuti’s son, Femi Kuti. Track 2, “Heat” samples Tony Allen, Fela Kuti’s one-time fellow band member and co-founder of the Afrobeat genre.

Also unique are “Payback is a Grandmother” and “A Song for Assata.” “Payback is a Grandmother” is a continuation of the series of “Stolen Moment” songs that appeared on One Day It’ll All Make Sense, whereby Common weaves a fictional tale in which he pursues a thief (on this occasion the thugs who have robbed his grandmother). Amidst the intricate caper, the song emphasizes the importance of family values. As Common says in the song’s intro “I don’t know what was on y’all niggaz birds to go up to the boat – and start robbin old folks”. The song ends in a skit involving police officers at the scene of a crime where, breaking out of character, one of the officers can be heard saying “the skit definitely needs more added to it … Someone get Prince Paul on the phone please” – the last remark being a recognition of Prince Paul’s reputation as a pioneer of the album skit. [Con’td —>]

“A Song for Assata” chronicles the arrest, trial, incarceration and Cuban political asylum of Assata Shakur (a member of the Black Panther Party, after whom Common named his daughter, Omoye Assata Lynn). The spoken word piece at the end of the track is a quote from Assata Shakur. During the album’s creation, Common traveled to Havana, Cuba where he met and talked with Shakur. The excerpt used details Shakur’s thoughts on what freedom is and what it means to be free. As she notes:

I know a whole more about what freedom isn’t

Than about what it is, cause I’ve never been free.

I can only share my vision with you of the future, about what freedom is.

Working as both a battle song and self-reflection, the sensuous “Nag Champa (Afrodisiac for the World)” sees Common proclaiming himself “The Earth, Wind, and Fire of hip hop” while admitting “By Rakim and Short I been inspired” – a comment which compounds the two very contrasting rap artists. Common goes on to note:

The mind is funny, how it’s spent on gettin’ it [money]

Who say the jam is “Money, Cash, Hoes”

“Nag Champa” is one of a few rare occurrences in which Common’s frequent collaborator, producer J Dilla takes on the role of singer. Common later explained:

When I was working on Like Water for Chocolate I would go to Detroit like two to three times a month. When we would go to Jay Dee’s basement we would always burn nag champa incense, that’s where I got that title from. I was listening to Slum Village a lot, so I was influenced by them. With “Nag Champa,” which was either the first or the second song for Like Water for Chocolate, we had it for a long time with no chorus. We kept trying but there wasn’t nothing good coming out. I took T3 and them to the studio to work with me on the chorus; T3 started chanting something, he didn’t finish, but he had a little idea. Jay Dee heard and started really singing it and got it together. Jay had an incredible voice-he actually was going to do a singing album. We used to talk about that when he would stay in LA.

Although Questlove was the album’s executive producer, a large deal of the production work was handled by Jay Dee (aka J Dilla) of Slum Village and The Ummah. Common and Jay Dee both hailed from the Great Lakes region (Jay Dee from Detroit and Common from Chicago) and were good friends. The track “Thelonius” was even placed on both Like Water for Chocolate and Slum Village’s 2000 release Fantastic, Vol. 2.

Like you said, being that he is one of the most respected producers, I really loved his music throughout the time. Gang Starr has always been one of my favorite groups. I’ve always wanted to work with him. It was time. I connected with him and seen him in a couple of places. I told him that I wanted to work with him. It took a little time to get up with him but eventually, we got up. That was the last song I recorded for ‘Like Water For Chocolate’. We released ‘Dooinit’ first and then the single and video for ‘The 6th Sense’. Then, we followed it up with ‘The Light’.

Like Water for Chocolate received widespread acclaim from music critics. Rolling Stone’s Kris Ex called Common “a hip-hop MC willing to actually examine himself through his art”. NME’s Stevie Chick described him as a “great storyteller” who is “equal parts philosopher and documentarian.” Spin’s Peter S. Scholtes praised Like Water for Chocolate as “his most aggressive and powerful record yet”, and The Wire also hailed it as his best album. The Source wrote that the album finds “a more worldly Common … creating full-fledged jazz, funk and soul songs”. Mojo called Like Water for Chocolate the “most user-friendly contribution so far to the wave of ‘conscious’ rap.” RapReviews critic Steve Juon wrote: “From ‘Payback is a Grandmother’ all the way to the finale ‘Pop’s Rap III’ you’ll find your ears have been smothered in a sweet darkness that Dove has never been able to wrap in foil and sell for ninety-nine cents. You may in fact be coming down off a hip-hop sugar high. Not to worry – just hit random play and any track on this album will give you another fix.”

Q described Like Water for Chocolate as “wholemeal hip hop: chewy and a wee bit bland but nutritious all the same.” In a mixed review, Sal Cinquemani of Slant Magazine felt that the album “certainly attempts to make change (musically and socially), but part of my disappointment comes from the high expectations that naturally arise when an artist tries to break from the norm”, concluding that “maybe if there were more hip-hop artists like him, the burden wouldn’t be placed solely on one rapper’s shoulders.”

The music online magazine Pitchfork placed Like Water for Chocolate at number 169 on their list of top 200 albums of the 2000s.

The album was included in the book 1001 Albums You Must Hear Before You Die.